As Oman welcomes His Royal Highness Prince Mohammed bin Salman bin Abdulaziz Al Saud, Crown Prince, Deputy Prime Minister and Minister of Defense of the Kingdom of Saudi Arabia, several companies owned by the Oman Investment Authority, in cooperation with the Ministry of Commerce, Industry and Investment Promotion, signed memoranda of understanding with their Saudi counterparts to cooperate on specific projects within key and promising economic sectors.

The visions of the leaderships of the two brotherly countries have enabled such collaborative agreements towards strengthening ties in key areas that serve the two nations’ common interest and aspirations. 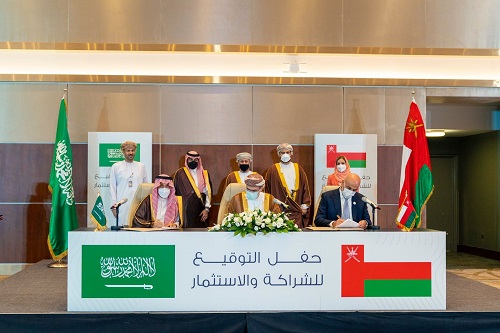 “The signing of these MOUs between OIA companies and their Saudi counterparts comes in light of the transformations and developments witnessed by the two brotherly countries. This step represents an opportunity for both parties to invest in key sectors and establish diversified partnerships for growth, sustainability and prosperity”, noted Mulham bin Bashir Al-Jarf, Acting Vice President of the Oman Investment Authority.

In the petrochemicals, renewable energy, and green hydrogen, the OQ Group signed three MOUs; the first with Saudi ACWA Power and Air Products, while the second is signed with Aramco Trading Company in areas of assessing oil storage suitability and trading of petroleum materials. The third MOU is signed with SABIC towards the development of the Duqm Petrochemical Complex project.

In areas of dry docks, logistics and maritime transport, the Asyad Group signed a memorandum of understanding with the Saudi Shipping Company. The Oman Minerals Development Company signed another MOU with the Saudi Maaden Company to assess opportunities for exploration and development in the mining sector.

OMRAN group also signed a memorandum of understanding for tourism investment with their counterpart Dar Al-Arkan Development Company to develop a tourism project in Oman’s Yetti Beach. Another memorandum of understanding was signed in the field of fish farming between Fisheries Development Oman (FDO) and Saudi Naqua. In the field of financial markets, an MOU is signed between the Muscat Stock and the Saudi Tadawul Group to cooperate in stock exchange operations and dual listing of companies.

It is worth noting that all these memoranda of understanding aim to enhance investments between the Sultanate of Oman and the Kingdom of Saudi Arabia, and to tap into potential opportunities for partnership in areas of interest to the two brotherly countries. They will further enhance efforts for improved integration and cooperation in alignment with the objectives of the two future visions of the two countries; Oman’s Vision 2040 and the Saudi Vision 2030.